A-Bomb is a minifigure in the custom theme, Hulk and the Agents of S.M.A.S.H and the alter ego of Rick Jones.

Rick Jones's alternative identity, A-Bomb, was created when Rick stole Red Hulk's sandblaster in an attempt to help Hulk stop and invasion by Annilhilus. He accidently overloaded the vehicle's gamma core and the resulting in an explosion that transformed him into a blue gamma powered hulk-like superhuman. 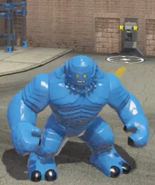 A-Bomb in Hulk and the Agents of S.M.A.S.H
Add a photo to this gallery
Retrieved from "https://ultimate-custom.fandom.com/wiki/A-Bomb?oldid=4322"
Community content is available under CC-BY-SA unless otherwise noted.