Amy Pond is a companion of The 11th Doctor and  a custom minifigure in the theme, Doctor Who.

Amelia Pond is introduced in the first episode of the fifth series (2010), "The Eleventh Hour", as a seven-year-old girl living with only her aunt when the Doctor (Matt Smith) crashes into her front yard one night. She asks him to investigate an unusual crack in her wall, but he is interrupted by an alert from his time machine, the TARDIS. He promises Amelia that he will return in five minutes, but is inadvertently late by twelve years. In the intervening period, the Doctor is believed by Amelia's family and friends to be her imaginary friend; her insistence that he is real leads to her being treated by psychiatrists. When the Doctor returns, Amy is nineteen years old and working as a kissogram. She helps him save Earth from the galactic police force the Atraxi, and when he returns two years later she begins travelling with him as his companion. At the end of "Flesh and Stone", Amy reveals that they had left Earth on the eve of her marriage to Rory Williams(Arthur Darvill) and attempts to seduce the Doctor. The Doctor finds Rory and takes him and Amy to 16th century Venice on an intended romantic date after which Rory continues travelling with them. In "Amy's Choice", Amy is pressured to resolve her conflicted feelings for the Doctor and Rory and realises the depth of her love for Rory. At the end of "Cold Blood", Rory is killed and then erased from history by the cracks in the universe. Because he is part of Amy's own time-line, she ceases to remember him. The Doctor takes Amy to 19th century France to lessen his guilt about Rory's loss and she forms a close friendship with famed painter Vincent van Gogh (Tony Curran).

In the series finale, "The Pandorica Opens"/"The Big Bang", Rory reappears in 102 AD as a Roman centurion. He triggers Amy's memories, but as she remembers, it is revealed that the centurion Rory is actually an Auton—a duplicate of living plastic—created from Amy's memories to help capture the Doctor. Rory's consciousness tries to fight his programming, but he is compelled to shoot and kill her. Amy's body is kept alive in the Pandorica, a special prison intended to trap the Doctor. The Auton Rory protects it for 2000 years. The Doctor realises that Amy is connected to the cracks in the universe which originated from a temporal explosion on her wedding day. He tells her that her parents had been erased by the crack in her wall and urges her to remember them. After he uses the Pandorica to reboot the universe, the Doctor travels back through his timeline and is able to plant memories in Amy of the TARDIS. Amy awakes on her wedding day in a timeline where her parents are again part of reality and marries a restored Rory. Her memories are stirred by the TARDIS-shaped diary River Song (Alex Kingston) leaves for her. Once Amy remembers the Doctor, he is restored him to reality. It is mentioned in The Sarah Jane Adventures serial Death of the Doctor that the Doctor dropped Amy and Rory off on a "honeymoon planet", and the couple continues their honeymoon aboard an interstellar cruise ship which the Doctor saves from crashing into a populated planet.

The sixth series (2011) begins with Amy and Rory living a normal domestic life. They receive an anonymous invitation to the Utah desert where they reunite with the Doctor —now aged nearly two hundred years since they have last met —and fellow invitee River Song. Amy witnesses the Doctor's death at the hand of an astronaut, but they discover the Doctor also invited a younger version of himself, with whom they travel to 1969 Washington, D.C. to investigate strange occurrences involving the Silence, an alien race who cannot be remembered after they are encountered. While there, Amy informs the Doctor she is pregnant before attempting to shoot a little girl in an astronaut suit to save his life in the future. In the girl's orphanage room, Amy finds strange pictures of herself holding a newborn baby. When the Doctor questions Amy about the pregnancy, she insists she was wrong and further investigation by the Doctor is inconclusive. Throughout their adventures, Amy is plagued by strange visions of a woman wearing an eye-patch (Frances Barber) appearing sporadically only to her. In "The Almost People" it is revealed that the Amy present is actually a duplicate animated by her consciousness, while the real Amy in captivity by the eye-patched woman and about to give birth. In "A Good Man Goes to War", her baby —named Melody Pond —is kidnapped by the eye-patched woman, Madame Kovarian, who will train her to one day kill the Doctor. River Song then arrives and tells Amy that she is an adult Melody.

A flashback in "Let's Kill Hitler" introduces Amy and Rory's childhood friend Mels (Nina Toussaint-White). As teenagers, it was Mels who pointed out that Rory had been in love with Amy for some time, which led to the two dating. In the present, Mels hijacks the TARDIS and directs it to 1939 where she is shot by Hitler (Albert Welling) and regenerates into River Song, revealing that Amy had grown up alongside her daughter, who was trained by the Silence to kill the Doctor. Amy is later persuaded by the Doctor to let her adult daughter make her own way in life. In "The Girl Who Waited", Amy becomes separated from the Doctor and Rory on a planet's quarantine facility and lives on her own for 36 years before they return. The Doctor wants to go back in time to rescue the younger Amy, but the older Amy insists that they take both of her. However, the Doctor knows the TARDIS will not accept the paradox and is forced to leave the older Amy behind. In "The God Complex", the Doctor breaks Amy's faith in him after he discovers that they are trapped in a prison for a being that kills by feeding on faith. He then parts ways with her and Rory after giving them a house and car. Amy appears briefly in "Closing Time", where she is shown to have become a model. Series finale "The Wedding of River Song" depicts an alternate universe created by River refusing to kill the Doctor in Utah, as previously shown. Amy leads a secret organisation which fights the Silence. She reunites the Doctor with River and later kills Madame Kovarian for kidnapping Melody. After history is restored, River visits Amy and reveals that the Doctor has faked his death. At the end of the 2011 Christmas special, the Doctor returns to Amy and Rory two years later and has Christmas dinner with them.

The series seven opener "Asylum of the Daleks" (2012) shows that Amy and Rory are about to divorce. On the Daleks' mission, the Doctor engineers a reconciliation between the two, allowing them to discuss their feelings for each other. It is revealed Amy left Rory because she has been infertile since "A Good Man Goes to War", and knew he wanted children.The couple continue traveling with the Doctor on small adventures in "Dinosaurs on a Spaceship" and "A Town Called Mercy", but leave at the end of each to return to their normal lives. In "The Power of Three", Amy says that the Doctor has been in her and Rory's life for ten years, and she now works as a journalist. The couple realise they have to choose between their normal lives and their life with the Doctor. They are inclined to choose the former, but Rory's father Brian (Mark Williams) encourage the pair to continue travelling with the Doctor.Their next adventure, "The Angels Take Manhattan", is their last. In the story, Amy and Rory are threatened by the evil Weeping Angels, whose touch will send them into the distant past to die alone. Having witnessed this eventuality, they attempt suicide, creating a paradox which destroys all but one Angel, but also renders the area permanently off-limits to the Doctor's TARDIS. In the present, the surviving Angel sends Rory back in time, and knowing the Doctor cannot recover him, Amy allows the Angel to touch her too so she can be with him. Gravestones in a New York cemetery reveal that Rory died at the age of 82 and Amy died at the age of 87. River arranges for Amy to leave the Doctor a message in the afterword of a 1930s pulp fiction novel, where she says she is happy with Rory and that they worry about the Doctor travelling alone. "P.S.", a mini shows-episode supplement based on the original script for this episode, shows that Rory and Amy adopted a son, in 1946, and named him Anthony Brian Williams. 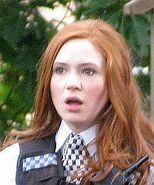 Amy Pond in Doctor Who
Add a photo to this gallery
Retrieved from "https://ultimate-custom.fandom.com/wiki/Amy_Pond?oldid=4407"
Community content is available under CC-BY-SA unless otherwise noted.