Jek-14 is a custom minifigure in the custom theme, Lego Star Wars

In The Yoda Chronicles, Count Dooku and General Grevious stole the lightsabers belonging to Yoda's Padawans, so they could use the crystals inside of them to create an army of Sith-enhanced Clone Troopers. Yoda, Mace Windu and R2-D2 arrived, to stop them. When they had defeated Dooku, he used the force to push the crystal towards one Clone Trooper, who awoke. They were unable to fight him, because he was so good with the force. He choked Yoda with the force, outside and prepared to kill him, but Yoda and Mace Windu were saved by the Padawans. Jek-14, the Sith Clone was later introduced to Palpatine after him and Count Dooku escaped. He chose not to fight for the Sith in the second episode, and decided he just wanted to create things with the force. Jek escaped Geonosis, after Yoda and Dooku chased after him, attempting to get him on each of their sides. Dooku and Grievous captured him, and cloned him to finally make their army of Sith Clones. While this was occurring, Anakin Skywalker blew up the Malevolence, causing the army to come crashing towards Corusant. Darth Sidious was there, and saved them with the force, while no one was looking, to protect his identity. Grievous carelessly threw Jek out of the Malevolence, knowing the Sith had no more reason to use him. The Sith Clones began attacking the Jedi Temple, but they were saved by Jek-14, who destroyed his clones, and sent Count Dooku and General Grievous flying into space. Jek then told the Jedi to leave him alone, and flew away in a Headhunter. 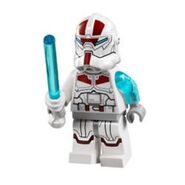 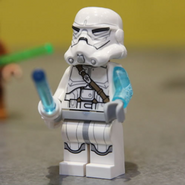 Jek-14 2014
Add a photo to this gallery
Retrieved from "https://ultimate-custom.fandom.com/wiki/Jek-14?oldid=4527"
Community content is available under CC-BY-SA unless otherwise noted.