Mr Fantastic is a member and the founding member of The Fantastic Four. He is a custom minifigure in Marvel Superheroes: Origins.

Much of Reed Richard's history is unknown, but at a certain point he was trapped in the Baxter Building when Doctor Doom sent it to space. At one point Reed discovered the Negative Zone.

After the breakout event, Reed helped Iron Man to create the super-prison "Number 42" in the Negative Zone. Later Reed helped Ant Man on the research of Kang the Conqueror's wife Ravonna in the Baxter Building.

Later, Tony visited Reed in the Baxter Building and told him his foundings of Asgard, Reed continues his observations ignoring Tony. After Tony said Susan is too good for him, Reed threatens him and they both laughed. He told him that Susan distanced from him. The two are getting attacked by Doombots, they tried to escape but got surrounded by them. They suddenly deactivated and form into bombs. Iron Man discovered that Invisible Woman and Wasp got kidnapped, Reed went to disarm the bombs while Iron Man chased the kidnappers of Invisible Woman and Wasp, Tony returned and told Reed that they got away. The other Avengers arrived and they decided to venture to Latveria. Reed invaded Doom's castle to rescue Invisible Woman and Wasp, they fought a hard battle against Doom, but they left when Doom stopped fighting and freed both Invisible Woman and Wasp and left the castle.

At Avengers Mansion the Avengers and Fantastic Four discussed about the reason of Doom's attack.

He, Sue and Johnny later went to a peace conference in another dimension. When Galactus attacked he was part of the special fifth team that was to destroy a slumbering Galactus. When the giant awoke and began feasting, Reed and Tony determined turned matter into anti-matter to feed on it. They devised a plan to send him into the Negative Zone to feed endlessly. The plan worked and Galactus was banished. Reed and the other heroes then left the scene leaving the Avengers to claim credit. 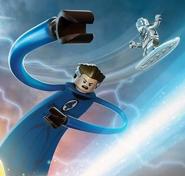 Mr Fantastic with Silver Surfer
Add a photo to this gallery
Retrieved from "https://ultimate-custom.fandom.com/wiki/Mr_Fantastic?oldid=4610"
Community content is available under CC-BY-SA unless otherwise noted.