Rick Jones is a minifigure in the custom theme, Hulk and the Agents of S.M.A.S.H and is the alter ego of A-Bomb.

Rick Jones has been Hulk's best buddy for years. Because he doesn't like how the military have used Spy Drones to make his big green buddy look like a literal monster, who should be feared, he decided to use his own Spy Drones to show the world what kind of a hero the Hulk can be. Unfortunately when he brought up the idea Hulk wasn't interested. 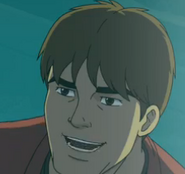 Rick Jones in Hulk and the Agents of S.M.A.S.H
Add a photo to this gallery
Retrieved from "https://ultimate-custom.fandom.com/wiki/Rick_Jones?oldid=4306"
Community content is available under CC-BY-SA unless otherwise noted.