The 3rd Doctor is the third incarnation of The Doctor and he is a custom minifiigure in the theme, Doctor Who.

Within the series' narrative, the Doctor is a centuries-old Time Lord alien from the planet Gallifrey who travels in time and space in his TARDIS, frequently with companions. When the Doctor is critically injured, his body can regenerate; as a result, his physical appearance and personality change. Pertwee portrays the third such incarnation, a dapper man of action of stark contrast to his wily but less action-oriented predecessors. While previous Doctors' stories had all involved time and space travel, for production reasons Pertwee's stories initially depicted the Doctor stranded on Earth, where he worked as a scientific advisor to the supernatural paramilitary group UNIT. His adventures often fitted into the spy-fi genre which had been popularised by The Avengers the decade prior. Within the story, the Third Doctor came into existence as part of a punishment from his own race, the Time Lords, who forced him to regenerate and also disabled his TARDIS. Eventually, this restriction is lifted and the Third Doctor embarks on more traditional time travel and space exploration stories.

His initial companion is UNIT scientist Liz Shaw (Caroline John), who unceremoniously leaves the Doctor's company between episodes to be replaced by the more wide-eyed Jo Grant (Katy Manning), who then continues to accompany the Doctor after he regains use of his TARDIS. His final companion was intrepid journalist Sarah Jane Smith (Elisabeth Sladen), who would go on to become the Doctor's longest-serving companion.

The Third Doctor was a suave, dapper, technologically oriented, and authoritative man of action who practised Venusian Aikido (or Karate). A keen scientist, he maintained a laboratory at UNIT where he enjoyed working on gadgets in his TARDIS. In his spare time, he was fond of motoring, handing all manner of vehicles. His favourite car was a canary-yellow vintage roadster that he nicknamed "Bessie," a construct which featured such modifications as a remote control, dramatically increased speed capabilities, and inertial dampeners. He also maintained a hovercraft-like vessel that fans nicknamed the Whomobile. The First Doctor, upon meeting the Third, described him indignantly as a "dandy", while the Second Doctor, with whom the Third had something of an antagonisticrelationship on the occasions they encountered each other, referred to him as "Fancy Pants".

While this incarnation spent most of his time exiled on Earth, where he grudgingly worked as UNIT's scientific advisor, he was occasionally sent on covert missions by the Time Lords, where he would often act as a reluctant mediator. Even though he developed a fondness for Earthlings with whom he worked (such as Liz Shaw and Jo Grant), he jumped at any chance to return to the stars with the enthusiasm of a far younger man than himself (as can be seen in his frivolous attitude in The Mutants). If this Doctor had a somewhat patrician and authoritarian air, he was just as quick to criticise authority, too, having little patience with self-inflated bureaucrats, parochially narrow ministers, knee-jerk militarists or red tape in general. His courageousness could easily turn to waspish indignation; it is thus no surprise that a common catchphrase of his was, "Now listen to me!"

Despite his occasional arrogance, the Third Doctor genuinely cared for his companions in a paternal fashion, and even held a thinly veiled but grudging admiration for his nemesis, the Master, and for UNIT's leader, Brigadier Lethbridge-Stewart, with whom he eventually became friends. In fact, even when his much-resented exile was lifted, the highly moral and dashing Third Doctor continued to help UNIT protect the Earth from all manner of alien threats.

In general, this incarnation of the Doctor was more physically daring than the previous two and was the first to confront an enemy physically if cornered (both of his previous incarnations nearly always attempted to dodge, flee or negotiate rather than attack). This often took the form of quick strikes, with the occasional joint lock or throw—usually enough to get himself and anyone accompanying him out of immediate danger, but usually not to the extent of a brawl, in keeping with the Doctor's non-violent nature. He only used his fighting skills if he had no alternative, and even then generally disarmed his opponents rather than knocking them unconscious. Indeed, his martial prowess was such that a single, sudden strike was usually enough to halt whatever threatened him, and at one point he reminded Captain Yates (physically as well as verbally) that Yates would have a difficult time removing him from somewhere when he did not want to be removed (The Mind of Evil).

Perhaps due to his time spent on Earth, or maybe just as a function of his pacifistic and authoritative tendencies, the Third Doctor was a skilled diplomat (keeping talks going in The Curse of Peladon, for example) and linguist, as well as having an odd knack for disguises; all of this, combined with his formidable galactic experience, often allowed the Third Doctor to play a central role in the events in which he found himself. 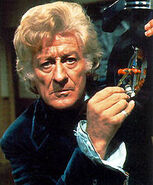 The Third Doctor in Doctor Who
Add a photo to this gallery
Retrieved from "https://ultimate-custom.fandom.com/wiki/The_3rd_Doctor?oldid=4393"
Community content is available under CC-BY-SA unless otherwise noted.