The Leader is a minifgure in the custom theme, Hulk and the Agents of S.M.A.S.H and The Avengers: Earth's Mightest Heroes.

After the massive breakouts, he took over The Cube with help from Abomination and Absorbing Man and turned it into his own base of operations where he made use of the Gamma radiation research to further his own goals. After a successful test of his "Gamma Dome" the Leader left the cube and allowed the Avengers to destroy the generator while he escaped with his two fellow Gamma mutants.

Later, Leader plans to blanket the Earth in Gamma Energy causing anyone exposed to it to become Gamma-based monsters. Unfortunately, it couldn't affect Thor or Doc Samson (who had already been exposed to it). Though the generator at the Cube was destroyed, Leader had another one stationed in Las Vegas. As another Gamma Dome expanded, everyone in the city were turned into Gamma Monsters including the Avengers and S.H.I.E.L.D. agents.

When Thor and Doc Samson had been taken prisoner, Leader found out from Thor that Gamma Energy doesn't affect Asgardians and unleashes Abomination on him. When Thor does regain Mjolnir, Leader summoned Absorbing Man who ended up absorbing the properties of Mjolnir, mockingly saying that he planned for it, that he has planned for everything. Then the Hulk came crushing through the floor.

When Hulk and Hawkeye, (immunized from the effects of the Gamma energy), arrived, Leader had Abomination fight Hulk while he and the Gamma-powered Avengers attacked Hawkeye who launched special arrows that cured the infected Avengers before fighting The Leader. After Hulk had defeated Abomination by sending him flying out into the desert and Thor defeated Absorbing Man by sending him straight up in the air, Leader's battlesuit was shattered by the now virtually indestructible Absorbing Man as Hulk lifted the Gamma Generator off the roof causing the Leader's head to expand as he threw it into space. The next day, Leader and Absorbing Man were taken into S.H.I.E.L.D. custody with the other Gamma-based villains to the new prison facilty after four of them were compromised when the Breakout happened.

The Leader helped the Avengers and other prisioners in Prison 42 when Annihilus and his Negative Zone Bugs attacked them inside the prison. He ranted about voices in his head while fighting. Abomination helped him get to the control center, where he disrupted the sheilds protecting Annihilus. After the sheilds were disrupted, the Avengers took down Annihilus. The pain in the Leader's head went away. The Leader was glad that the fight was over.

After the battle, Leader was either placed back in his cell or taken to Hydro-Base.

Biography (Hulk and the Agents of S.M.A.S.H)Edit

The Leader became the Hulk's arch nemesis after being exposed to the same Gamma radiation that created him. With the massive intellect Leader possesses he has become obsessed with destroying Hulk.

It was revealed that he was the one who supplied the mind-control technology to Annihilus. At the end of the episode, it was shown that Leader had planted Skaar on the Agents of S.M.A.S.H. to learn about them in exchange that The Leader tells Skaar about his past.

Into the Negative ZoneEdit

Leader has Blastaar use special snakes from the Negative Zone in order to petrify the Agents of S.M.A.S.H. Hulk teams up with Thing to enter the Negative Zone in order to find the snakes and get the venom for an antidote. When Hulk ends up captured, Leader revealed that he had been watching Hulk's web show where it was revealed that he confiscated Annihilus' Cosmic Control Rod following his failure, supplied Sauron with the weapons for his plot and tipped off Laufey on where he can find Ymir in exchange that he gains equal control of the world with them. Leader then places a chip on Hulk so that he can go on a rampage upon being released back on Earth. Hulk manages to break free and beat up Leader. Before Hulk can continue beating up Leader, Thing manages to stop him so that they can get the antidote to the Agents of S.M.A.S.H. After the Agents of S.M.A.S.H. are cured, they find that Hulk has Leader in their cell.

The Leader in Hulk and the Agents of S.M.A.S.H

The Leader in Lego Marvel Superheroes

The Leader in The Avengers: Earth's Mightiest Heroes 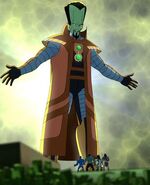 The Leader in the episode The Incredible Shrinking Hulks
Add a photo to this gallery
Retrieved from "https://ultimate-custom.fandom.com/wiki/The_Leader?oldid=4599"
Community content is available under CC-BY-SA unless otherwise noted.