Start a Wiki
Wolverine is a minifgure in the custom theme, Hulk and the Agents of S.M.A.S.H.

Wolverine just showed in New York City, saving Spider-Man from the dinosaurs by killing them. He became the new member of the New Avengers and helped stopped Kang from taking over the world.

Wolverine helped the Avengers fight the Heralds of Galactus, along with the Thing, Wasp, and the Human Torch, battled against Stardust. He also helped destroy the machine used for devouring the Earth. Later, he helped the Avengers succefully send Galactus into the Negative Zone. After the fight, He and the other heroes left, leaving the Avengers with civillains who hailed them as Earth's Mightiest Heroes. 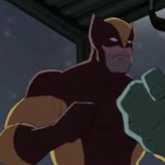 Wolverine in Hulk and the Agents of S.M.A.S.H.
Add a photo to this gallery
Retrieved from "https://ultimate-custom.fandom.com/wiki/Wolverine?oldid=4455"
Community content is available under CC-BY-SA unless otherwise noted.